This documentation goes though the process of manually building a base Kali Linux image for the Intel Edison board. These steps were derived from frankensteining the edison build scripts for Debian Jessie and some of the Kali Linux ARM build scripts. All of the content from this post can be found in my github repo for this project here, along with pre compiled images (coming soon!) and ansible scripts for automated building.

Note, all of these steps were tested in Ubuntu Linux 14.04 x64 LTS. As of this writing, this OS/Version has the most support for doing Edison source builds. I have done these steps in other operating systems, but the process is not as clean due to bugs, script tweaks, etc.

This is the first post of the series and will cover the method for manually building Kali Linux images for Intel Edison. Stay tuned for followup posts...

Read more »
Posted by Ryan Holeman at 2:59 PM No comments: 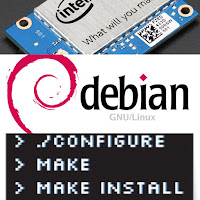